Mirum Pharmaceuticals, Inc. (Nasdaq: MIRM), a biopharmaceutical company focused on the development and commercialization of novel therapies for debilitating liver diseases, presented an analysis from its Phase 2 INDIGO study in an oral late-breaker session at the Digital International Liver Congress™ 2020. The five-year analysis showed that patients with PFIC2, also known as bile salt export pump (BSEP) deficiency, who achieved sBA control on long-term maralixibat treatment have a significant improvement in transplant-free survival.

"The maralixibat data demonstrate a well-tolerated, long-term treatment option to address PFIC2, which may provide patients with not only a viable treatment alternative to liver transplantation, but also a possible path to addressing many of the quality of life challenges that can make PFIC a burdensome disease for patients and their families," said Richard Thompson, professor of molecular hepatology at King’s College London, who presented the data.

In February 2020, the NAPPED consortium published an analysis showing that surgical interruption of the enterohepatic circulation of bile acids can lead to transplant-free survival when sBAs are reduced by 75% or below 102 µmol/L. Data presented today demonstrate that, similar to the findings of NAPPED, patients exhibiting sBA control with pharmacological interruption of the enterohepatic circulation with maralixibat have significantly improved transplant-free survival (p=0.0006). Seven of the 19 non-truncating patients with PFIC2 achieved this response threshold. In addition, the data showed that maralixibat responders achieved improvement across numerous parameters including quality of life scores, normalization of liver enzyme and bilirubin levels if abnormal at baseline, decreased pruritus and accelerated growth. 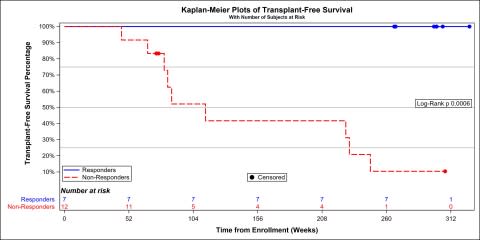 "These data further underscore the potential for maralixibat as an alternative to liver transplantation in children with PFIC2, addressing a major unmet medical need for a very burdensome disease," said Chris Peetz, president and chief executive officer at Mirum. "These children are in dire need of an effective pharmacologic treatment option, and we want to ensure patients have appropriate treatments beyond surgery. Given these efficacy data and the encouraging safety profile, we are planning to file a marketing authorization application in Europe this year with the hope of bringing maralixibat to patients with PFIC2 as quickly as possible."

Long-term treatment with maralixibat was well-tolerated. The most frequent treatment-emergent adverse events (TEAEs) were nasopharyngitis, vomiting, cough, diarrhea, pyrexia and abdominal pain. The majority of TEAEs were mild to moderate in severity and transient.

To view the presentation as well as other maralixibat posters presented during the meeting, please visit the Publications and Presentations section of our corporate website.

About the Maralixibat Phase 2 INDIGO Study

The INDIGO Phase 2 study was an open-label study evaluating the long-term treatment effects of pharmacological interruption of enterohepatic circulation with maralixibat in children with PFIC. INDIGO included 19 PFIC2 patients with non-truncating BSEP mutations who received maralixibat 280 µg/kg once or twice daily. Study endpoints were sBA, pruritus, quality of life, safety and tolerability.

Maralixibat is a novel, minimally absorbed, orally administered investigational drug being evaluated in several rare cholestatic liver diseases. Maralixibat inhibits the apical sodium dependent bile acid transporter (ASBT), resulting in more bile acids being excreted in the feces, leading to lower levels of bile acids systemically, thereby potentially reducing bile acid mediated liver damage and related effects and complications. More than 1,600 individuals have received maralixibat, including more than 120 children who have received maralixibat as an investigational treatment for Alagille syndrome (ALGS) and progressive familial intrahepatic cholestasis (PFIC). In the ICONIC Phase 2b ALGS clinical trial, patients taking maralixibat had significant reductions in bile acids and pruritus compared to placebo, as well as reduction in xanthomas and accelerated growth long-term. In a Phase 2 PFIC study, a genetically defined subset of BSEP deficient (PFIC2), patients responded to maralixibat. The FDA has granted maralixibat Breakthrough Therapy designation for treatment of pruritus associated with ALGS in patients one year of age and older and for PFIC2. Maralixibat was generally well-tolerated throughout the studies. The most frequent treatment-related adverse events were diarrhea, abdominal pain, and vomiting. The North American Expanded Access Program for ALGS is planned to open for registration in September 2020. For more information, please visit ALGSEAP.com. For more information about the Phase 3 study for maralixibat in pediatric patients with PFIC, visit PFICtrial.com.